Tick-borne disease on the increase

Tick-borne diseases highlighted on The One Show tonight

We posted about this in March but thought it worth mentioning again following discussion on BBC’s The One Show tonight. We are now also in the period of the year when we see the most ticks.

Recent confirmed cases of Babesia canis in four dogs in Essex that had not travelled abroad, have increased the need for surveillance of tick-borne disease in the UK.

We at Village Vets took part in the Big Tick Project, launched last year. It has become the largest-ever veterinary study of ticks and tick-borne disease in the UK, if not worldwide. In addition to the potential for tick mapping and greater understanding about what is perceived to be a rise in the risks to dogs and people from Lyme Disease, the emergence in four dogs in Essex of babesiosis, a life-threatening disease transmitted to dogs by infected ticks usually found in Europe, has highlighted the need for a major investigation on the scale of the Big Tick Project. Professor Wall of University of Bristol who have been running the study said: “The recent Babesia cases in Essex are of huge significance. The fact that we now appear to have established populations of the tick Dermacentor reticulatus acting as vectors of the introduced pathogen Babesia canis is a new and important development and a major concern for animal health. It clearly demonstrates the potential dangers from the inadvertent introduction of novel disease pathogens if vigilance and surveillance are not maintained.”

The risk of tick-borne disease has increased with changes in the Pet Travel Scheme rules which no longer require a tick treatment to be given to dogs and cats before returning to the UK. This has led to ticks being transported here from the continent and if conditions are favourable, their numbers could swiftly increase and they could spread across the UK.

Fortunately, we’ve not found these ticks locally yet and have not seen any cases of babesiosis but that doesn’t mean we shouldn’t be vigilant.

What are the symptoms of Babesia Canis?

Symptoms of babesiosis can range from mild to severe and include lethargy, lack of appetite, fever, anaemia, pale gums, an enlarged abdomen, weight loss and jaundice. If your dog has or had ticks and you are concerned for the health of your dog, please contact a vet immediately.

Ticks when they are first attached are easier to feel than they are to see! Check your pet’s skin on its head first (around the mouth and ears, behind ears and on its neck), then work your way down its forelegs and the rest of its body, searching for any lumps on the skin surface.

If you find a lump:

What to do if you find a tick

When attempting to remove a tick avoid handling the parasite directly. Wear gloves and dispose of ticks hygienically so they cannot re-attach themselves or lay eggs.

If you find a tick on your pet’s skin: 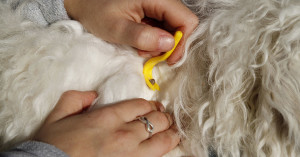 Do not attempt to burn, cut or pull the tick off with your fingers

– If in doubt, bring your pet in to see us

To reduce the risk associated with ticks we have innovative and convenient treatments that are only available on prescription. The options available to protect dogs and cats against ticks include spot-ons , sprays, collars and oral chewable formulations (dogs only). For best advice on how to remove a tick correctly from your pet please call us on 01704 872924 and speak to one of our nurses.

For more information please get in touch

We use cookies to ensure that we give you the best experience on our website. If you continue to use this site we will assume that you are happy for us to do so.Ok